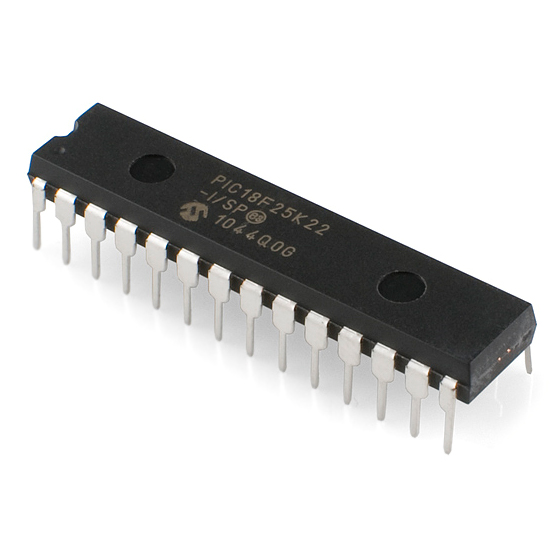 A PICAXE microcontroller is designed to be the brain of your electronic project. Originally designed as an educational system for schools, the PICAXE system has now also been widely adopted by hundreds of thousands of 'hobbyists' due to its ease of use. Each year thousands of high school students to...

28X2 (December 2010)
The original 28X2 parts were based upon the PIC18F2520 microcontroller. As this was a 5V only part, a special 3V
variant called the 28X2-3V was also produced, based upon the 3V equivalent microcontroller, the PIC18F25K20.
A new upgraded version of this microcontroller, the PIC18F25K22, has now been released. This is an enhanced
version microcontroller that has several advantages over the previous two parts:
- Full 2.1 to 5.5V operating range in one chip, meaning no need for separate 3V and 5V parts
- Increased optional clock speed, 64MHz external, 16MHz internal (default is still 8MHz internal)
- Many additional ADC channels, with individual ADC pin masking
- New support for touch sensors on all ADC channels
- Added support for RFIN and RFOUT commands for Manchester encoded radio communication
- New HPWM module with power steering
- Two additional PWM channels with separate timers (so now 4 PWM channels available on 28pin parts)
- New SR latch, voltage reference and DAC output modules
Therefore the 28X2 firmware has now been migrated to the new 18F25K22 part, with the original 2 parts superseded.
Within the PICAXE manuals the parts are now referred to with the following names (28X2, 28X2-5V or 28X2-3V): PDF DATA HERE